Protecting your pet from infection

LAST SUNDAY marked an important anniversary in the formation of the Bella Moss Foundation, formed in memory of 10 year-old Samoyed Bella, who died from MRSA, having contracted the infection at a veterinary hospital after undergoing routine surgery for a ligament rupture.

A ceremony in memory of Bella was held on Sunday 23 August at the home of owner-Jill Moss, in Edgware, North London, where friends, fellow campaigners and dog owners whose dogs had also contracted MRSA in the past year watched as Jill and her friend Mark Dosher planted a tree in Bella's memory.

On that tragic day, Bella's owner, actress Jill Moss vowed that her beloved pet's death would not be in vain and that she would see to it that pet owners were made aware of the dangers of MRSA and that he veterinary profession would take it seriously. Jill became determined to make changes to prevent any other animal's death in the same way and contacted Claire Rayner, President of the Patients Association who helped Jill set up The Bella Moss Foundation, which now helps hundreds of pets suffering with MRSA.

Ceremony
Amongst the guests at the ceremony was well known homeopathic vet, writer and broadcaster Richard Allport who used to treat Bella for minor ailments before she injured herself and had to undergo surgery at the north London veterinary hospital where she contracted MRSA.

Richard told OUR DOGS: "I admire and respect all he hard work that Jill has done to raise awareness of MRSA in pets. It is high time that the veterinary profession as a whole saw the proliferation of cases of MRSA as something to be concerned about. I'm pleased to say, it is now being taken seriously."

Jill Moss planted the tree - a white cherry blossom - and then spoke to the large number of guests who had attended, thanked them for their support and brought them up to date with how the campaign was going" I sat on the floor of the veterinary hospital as Bella slowly drowned in her own bodily fluids because they would not give her the treatment she needed," said Jill. "No dog owner should have to go through that ever. Better hygiene is required, better treatment for MRSA is needed, but slowly, gradually, the message is getting through. And it is so good to see so many owners here with their dogs who have survived MRSA, and I thank you all for your tremendous support.

"Bella was a unique dog, my soulmate, my closest companion. But her death will not have been in vain if we can make sure that no other pet dies of MRSA, which is totally preventable." "Bella's death is the tip of the iceberg and has become a big wake up call for the veterinary profession," says Moss. "The purpose of the charity is to raise awareness and educate both owners and vets, and we do this through campaigning, conferences and piloting research studies. I am now representing pet owners on the DARC (Defra Antimicrobial Resistance Committee) sub-committee looking into MRSA in animals and I hope that we can work with the veterinary organisations in the future.

There is much more that needs to be done." Jill Moss added: "On average I receive a 100 calls a month worldwide with reported cases of pets who have become infected following surgery. The common strain we are seeing in dogs and horses is EMRSA 15, which is the most virulent human strain. This means simply that people are infecting animals!" In the past 18 months, 310 cases of MRSA in animals in Britain have been reported to the government.

The British Veterinary Association (BVA) had previously claimed there were between 10 and 20 infections a year. Vets are being urged by the BVA to take precautions such as wearing sterile gloves and masks to prevent vulnerable pets picking up potentially deadly infections while undergoing operations.

Dr Freda Scott-Park, president-elect of the BVA, said there had been no recorded cases of MRSA being passed from animals to humans. She also insisted meat controls since the BSE crisis were so stringent that it was highly unlikely the antibiotic-resistant bacteria would be passed into the food chain. A DEFRA spokesperson said the committee on MRSA in animals had been set up as a precaution and it was designing Studies to obtain information on the extent of the problem and its possible implications for livestock and humans.

The first case of MRSA in an animal was documented in 1999 by David Lloyd, professor of dermatology at the Royal Veterinary College, who had been warning about the bug's potential impact for many years. University College Dublin scientists recently found signs of the bug in 25 animals including 14 dogs, eight horses, a cat, a rabbit and a seal, as well as 10 workers in veterinary surgeries. It is not known how the seal came to be seen by a vet. The researchers say the strain found in horses is unlike anything they have seen before and are convinced that at least one of the types of MRSA they discovered has been passed from humans to animals 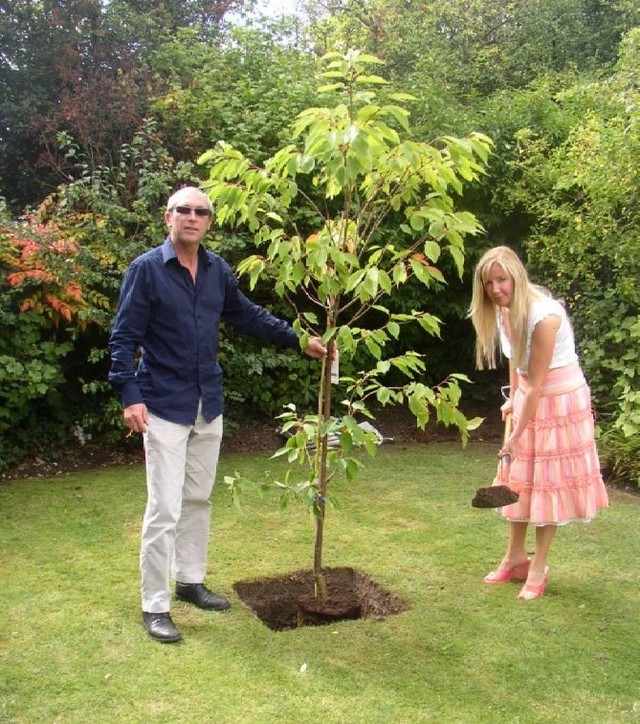 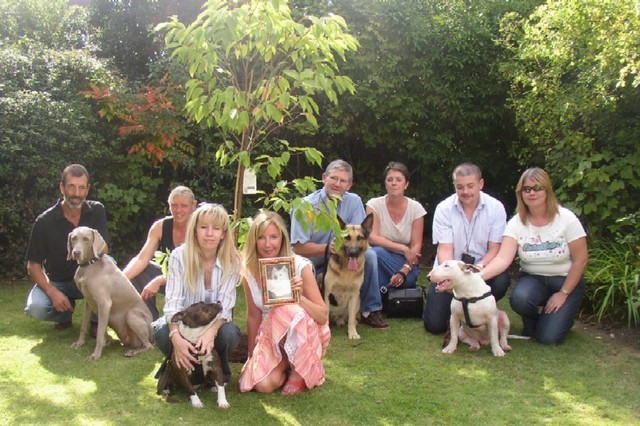 Jill Moss in front of Bella's memorial tree flanked by the owners of the other dogs who contracted MRSA this year. L to R: Trish and Terry Salisbury with Weinerarmer 'Tarka', Katrina Beckett with Staffle 'Jessie', Jill Moss, John and Viv Boon with GSD 'Duke', Graham and Mary Marriott with English Bull terrier 'Bud' 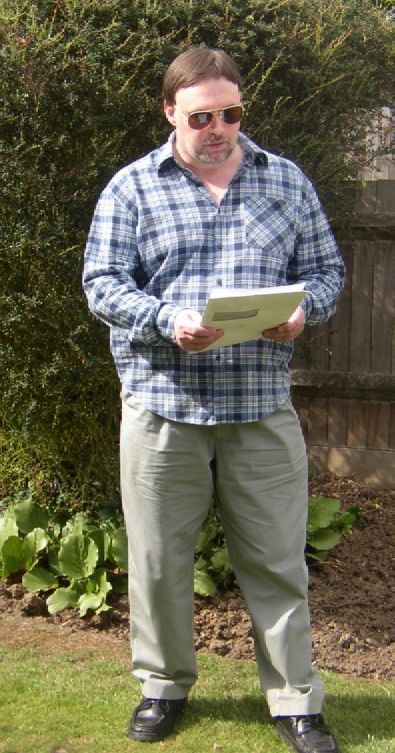 Steven Clarke reads his poem in tribute to Bella The guests – many of whom brought dogs that had suffered from MRSA – listening to Jill Moss.

Methicillin-resistant Staphylococcus aureus (MRSA) is a highly pathogenic multiple-drug resistant (MDR) microorganism that has recently become more prevalent in the community. It has been found that MRSA strains can also contain genes that encode the panton valentine leukocidin toxin (PVL). The PVL toxin has been shown to be responsible for many of the severe clinical symptoms of infection with MRSA, such as furunculosis, severe necrotizing pneumonia, and necrotic lesions of the skin and soft tissues. The aim of this study was to determine the presence of the S. aureus PVL toxin genes (lukS-PV and lukF-PV) in MRSA strains isolated from companion animals. Eleven MRSA isolates, from a total of 23 tested, were shown to possess the mecA gene and the PVL toxin genes. Pulsed-field gel electrophoresis showed that the 11 PVL toxin positive MRSA strains were highly clonal.

The full article can be downloaded by clicking below. It's charts and references don't lend themselves to 'web page' treatment

A memorial has been held for Samoyed Bella, the first recorded dog to die of MRSA in the UK. Owner Jill Moss, who has been campaigning to raise awareness of the risks of MRSA to pets, planted a white cherry blossom tree in memory of Bella who died from MRSA following an operation for a torn ligament.

She was joined by a group of owners whose dogs have also been infected by the superbug and been helped by the Bella Moss Foundation, the charity set up by Jill. Jill said: "Every year white cherry blossom will bloom in memory of Bella. Every year owners who have suffered the trauma of having a pet with MRSA will join us for a get together and every day I shall continue to campaign for better veterinary care in this country."

For more information about the Bella Moss Foundation visit www.thebellamossfoundation.com

This is a great article which reflects on our ongoing work in raising MRSA & Animal awareness, has pictures of the memorial day and much else

Click this link to view the article in full

MRSA Pet Basics
What is MRSA and how does it affect animals?
How did my dog become colonized with MRSA?
Are some animals more MRSA prone than others?
What are the MRSA challenges for dogs with dermatitis issues?
What kinds of treatment are available for animals with MRSA?
Should I isolate my mrsa positive pet?
Is it possible for dogs to be decolonized?
What should I be asking my vet about MRSA

MRSA, Your Home and Your Pet
What can you do at home to help your MRSA infected pet?
Is there bedding that will help a animal with an MRSA infection?
If family members and/or pets are mrsa positive will a newborn catch it?
Is clothing and other household items an MRSA problem for pets?
If my pet is MRSA positive will I catch it?
Will my MRSA positive pet contaminate my home?

Infection Control and Your Pet
How long does MRSA stay alive on surfaces
Handwashing to halt MRSA spread - what's the best method?
Will my pet get MRSA if they eat infected bandages?
What is good infection control practice for Pet Visitor animals?
How can I choose a good vet

Search the site for better results. Single words (leave out MRSA) are best

The Story of Bella

If you are in need of urgent advice and support regarding your pets health please contact Jill Moss - 07860 879079 (From the USA 00 44 7860 879079). Otherwise email info@thebellamossfoundation.com and ask for our factsheets.

Bella Moss Foundation (www.pets-mrsa.com) do not comment on clinical management of cases or drug therapy, but we can put your vet or doctor in touch with our health experts for intervention in cases where necessary. Please note all comments or questions posted to the website are replied to personally and not here on the site.